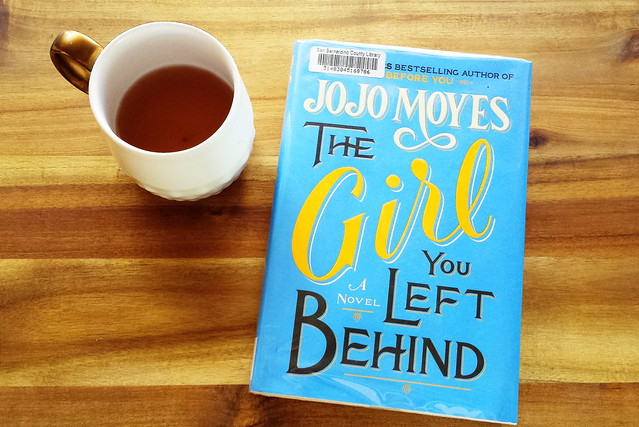 It's been a couple of months since my last book report. I've read 3 books since then reading for an average of 15 minutes a day.* The first novel I read was The Girl You Left Behind by Jojo Moyes. I read two other books by Jojo Moyes last year- Me Before You and After You, which is the sequel to Me Before You. You can read my short reviews for those books here. (I'm excited to watch the movie Me Before You this summer).

The Girl You Left Behind intertwines two stories set in different time periods. The first is set in France during World War I. The main character in this story is Sophie Lefèvre, who is happily married, but separated from her husband because he is a soldier at war. The Germans invade Sophie's home town and she is forced to feed them meals at her family-run hotel/restaurant. The commandant of the Germans takes interest in Sophie especially due to the beauty he sees in her through the portrait her husband painted of her.

The second story in the novel is set in London in 2006. The main character of this story is twenty eight year old Liv Halston, who now owns the portrait of Sophie. The portrait was a gift from her late husband; Liv is extremely attached to it. The true ownership of the painting comes into question during the second story when Liv's love interest Paul, who provides restitution for art stolen during wartime, sees the painting in her home having just received the case. Their blooming romance is obviously complicated by this information.

The ethical questions posed throughout the book, the well-developed characters, the romance, and overall excellent story-telling made it a worthwhile read for me. 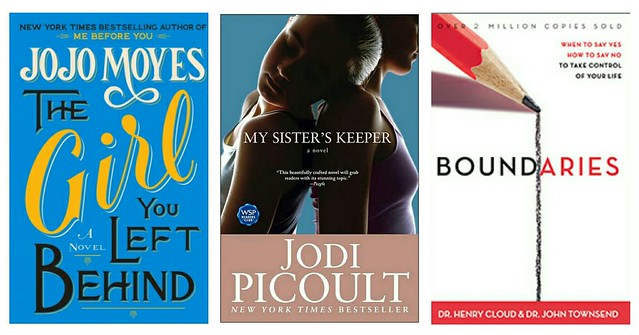 The second novel I read was My Sister's Keeper by Jodi Picoult. As I mentioned in this post, "the first book I read from Jodi Picoult was Keeping Faith, which was part of an assignment for an Abnormal Psychology class. Other books I've read and liked by Jodi Picoult: Nineteen Minutes, The Tenth Circle, Sing You Home, Handle With Care, Plain Truth, and Picture Perfect. Jodi Picoult often writes complicated, rich stories, which often pose ethical questions."

A few years ago my friend mentioned liking the movie My Sister's Keeper. Being a longtime fan of Jodi Picoult, I knew I wanted to read it then watch the movie though I heard it was a sad story. The book's main character is Anna, who is thirteen. When her sister Kate (16) developed childhood leukemia, her parents had another baby to help elongate Kate's life; Anna's bone marrow is an exact match to Kate's. Anna has had surgeries, transfusions, and other medical procedures meant to help her sister. At thirteen, Anna decides to sue her parents for the rights to her body. This decision is a blow to an already overwhelmed family.

My Sister's Keeper was touching, thought-provoking, and profound. I enjoy the depth of Jodi Picoult's characters and the intricacy of her plots. I plan to watch the movie soon.

The third book I read was the Christian book Boundaries by Dr. Henry Cloud and Dr. John Townsend. My friend gave this book to me some weeks ago. The authors discuss setting healthy boundaries with others and even yourself. Super insightful! I highly recommend it. I'm actually rereading it at a slower pace. I'm considering sharing a lengthier review about this one within the next couple of months.

I'm looking for lists of "read the books before they're made into movies" for 2016. This is an ongoing project of mine. I already mentioned being eager to see Me Before You being released this year. I'm looking forward to seeing Allegiant part 1, The BFG with my kids (I wrote a short review of those books here), and The Girl on the Train (review here).