This is a special guest post by my friend (and sister.  ;) I invited her to share this 12 dates idea with you. 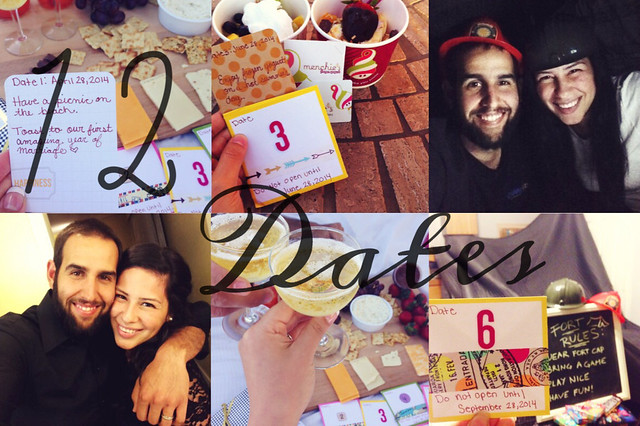 Hello everybody! My name is Jasmine. I would consider myself somewhat of a newlywed. Come this April, my husband and I will be celebrating our second anniversary, though it will be our ninth year together as a couple. Jessica invited me today to write about a gift I gave to my husband for our first anniversary.

Traditionally, the first anniversary is called “The Paper Anniversary," but the more modern gift for the first year of marriage revolves around clocks. It was completely unintentional, but my gift to Siquem loosely reflected these two traditions. I had been racking my brain for a while trying to think of the perfect gift for my husband because after 7 years of dating and 1 year of being married, you've pretty much run out of things to buy. Dress shirts? Check. Ties? Check. Watches and wallets? Check. Cologne? Check. A special edition wooden rubik's cube? Check. You catch my drift? As I was discussing ideas with Jessica, who by now I’m sure you have discovered is brilliant, [edited ;)] she said, “I saw something on Pinterest about a year of dates, maybe you could do something like that.” A year of dates is so perfect for Siquem because his love language is quality time. (If you're searching for the perfect Valentine’s Day gift, I highly recommend this gift idea because it’s reasonably priced, but still very thoughtful).

As we started expanding upon this idea of preplanning a year’s worth of dates we thought, “What if we take it one step further and instead of just being preplanned, they were also prepaid?!” It sounds like a good idea in theory, but how do you do you go about that? Just stick a wad of cash in each envelope and call it a day?? Even though I'm pretty sure my husband would have been happy to receive 12 different, cash-filled envelopes, I pretty much hate the idea of giving cash. I know, I know- people love receiving money, but I have a really hard time just putting dollar bills in an envelope and handing it over. So we thought a little harder and decided to go buy gift cards that were tailored to each date (much more my style) and I couldn't be happier with the results. 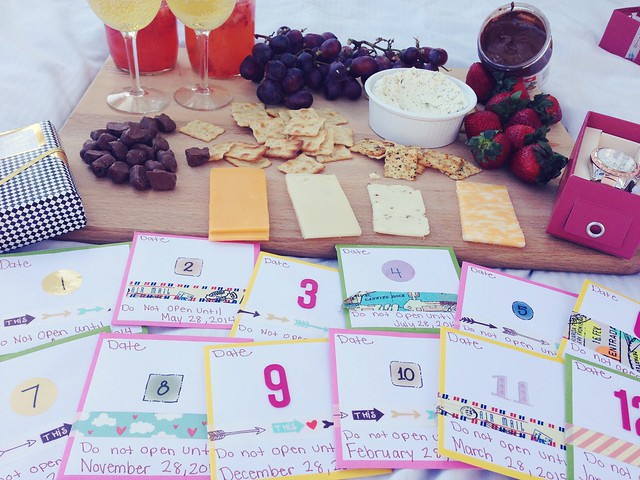 For our anniversary we planned a trip to San Diego to stay at the resort Paradise Point, which is a story for another day, but suffice it to say, it was breathtaking. Our suite was a minute’s walk from the ocean, so I planned a picnic on the beach for the first of 12 prepaid dates. I used this time to give Siquem my meticulously planned gift. Each envelope contained specific instructions as to the date it was to be opened. Inside each envelope was the date I had planned (written on Project Life, journaling, core cards) and the corresponding gift card.

Date 1: Not to be opened until April 28, 2014 read, “Have a picnic on the beach. Toast to an incredible first year of marriage.” This was the only date I did not include a gift card for since it included the more elaborate set up of chocolate-covered strawberries, crackers and cheese, strawberry lemonade, and sparkling cider. 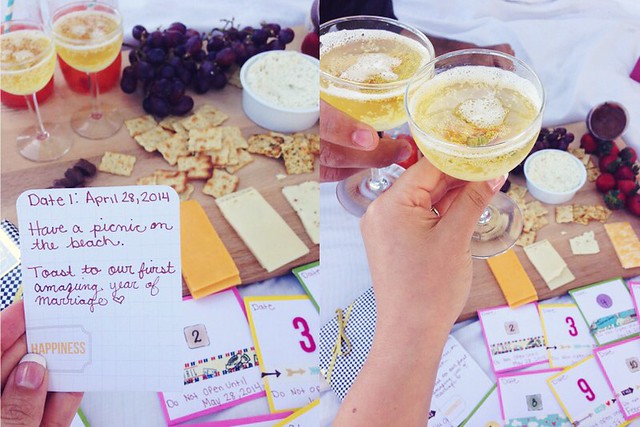 Date 2: Not to be opened until May 28, 2014 read, “Buy smoothies and enjoy a cold drink as we take a stroll through the park.” This date included a gift card to Juice it Up. 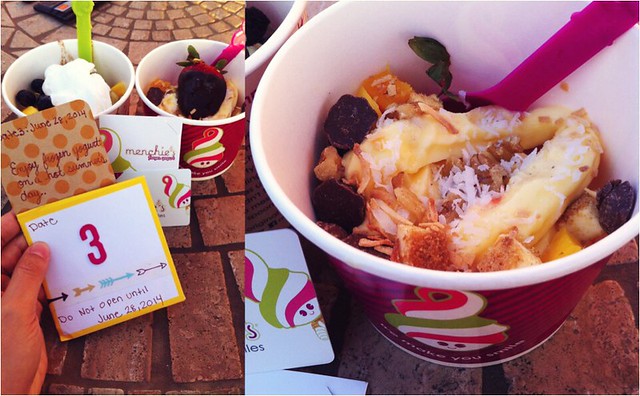 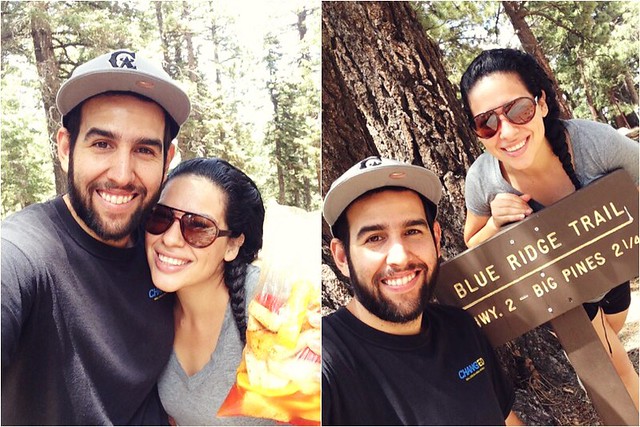 Date 5: Not to be opened until August 28, 2014 read, “Drive to the beach in the middle of the night, buy some breakfast, and get there just in time to see the sunrise.” This date included a gift card to Subway.

Date 6: Not to be opened until September 28, 2014 read, “Build a fort using whatever we can find. Buy a new card game to play in the fort.” This date was one of my favorites. It included a gift card to Target which was shaped like a face card from a deck of cards- perfect for this date. We used the gift card to buy five different games from the dollar bins. I pretty much dominated at Old Maid ;) 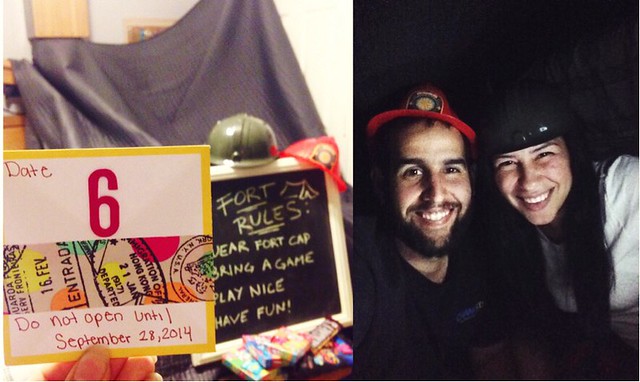 Date 7: Not to be opened until October 28, 2014 read, “Chopped Champions: using only what’s in the house and 99 cent store items, we will compete for who can make the best dish.” You guessed it. This gift included a gift card to the 99 cent store. Siquem and I absolutely love cooking competitions (who doesn’t?!), so I had a lot of fun planning this date!

Date 8: Not to be opened until November 28, 2014 read, “Enjoy some coffee while reading a book.” I’m actually not much of a coffee drinker, but a white, hot chocolate is pretty much the same thing, right?! This date included a gift card to Starbucks.

Date 9: Not to be opened until December 28, 2014 read, "Go to Neal’s donuts (a local donut shop). Buy donuts (duh) and hot chocolate. Enjoy by the fire place." I think I took this date a little too seriously as we must have repeated it over 5 times this winter ;) 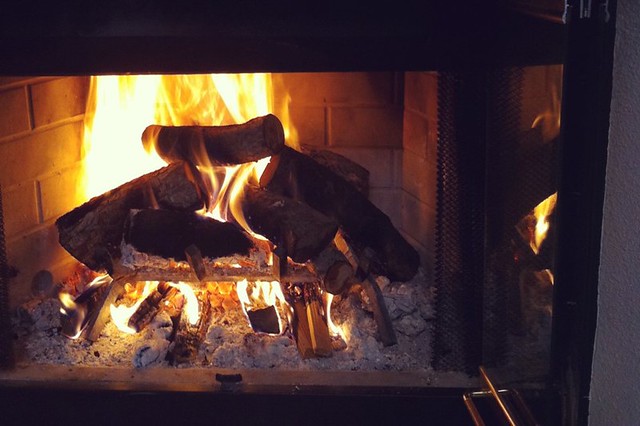 As you may have guessed, the next two dates have not yet taken place, but I promise not to tell Siquem if you don’t. Deal, internet? 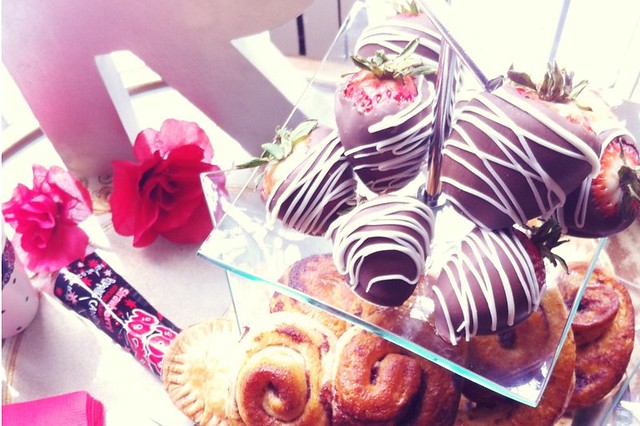 This was the gift that just kept on giving for both Siquem and I. I think it’s so important to get out of your routine and do something simple, but special. I had so much fun planning this gift idea, but even more fun waiting for the 28th to roll around so that we could open the envelope together. It was truly a fun escape and allowed us to spend quality time with each other at least once every month. I would recommend this gift idea again and again. I might even plan a whole new 12 dates for this second year. Now all I have to do is figure out how to incorporate the traditional “cotton” second anniversary gift and the modern “china” gift into these 12 dates ;) 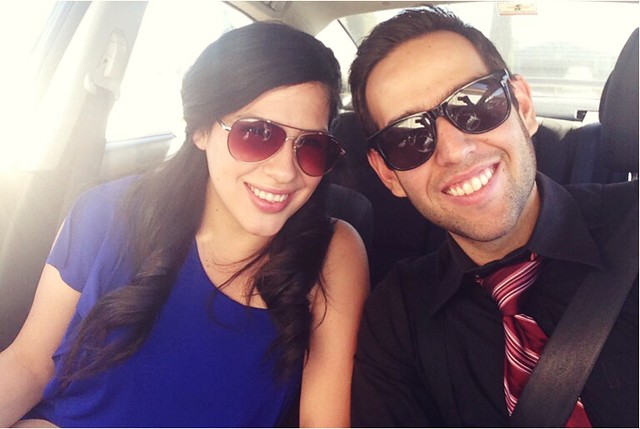 Thank you, Jasmine! I'm super inspired by this, and am planning 12 dates with Jesse this year. I'm presenting the gift on Valentine's Day. :)