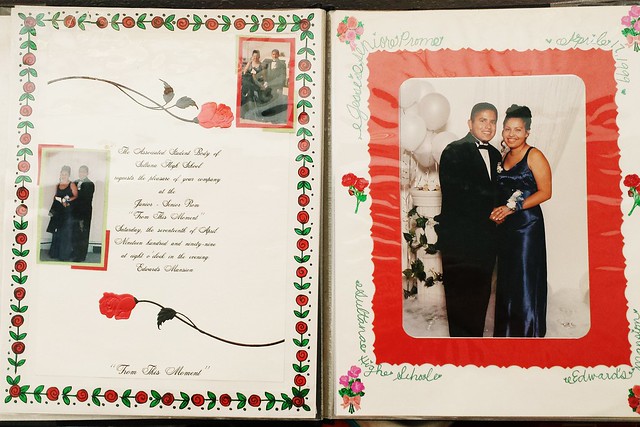 If you're immersed in the paper crafting culture like I am, you're constantly being solicited to buy new product. When a shiny, new, sparky kit or whatever comes out, my sister and I often joke, "Here. Just take all of my money." Sometimes it's not funny though! The feeling of wanting more new, shiny, sparky stuff makes me feel dissatisfied with my "old" stuff (which I thought was super cute when I originally bought it). I'm not going to blame the various companies out there. I'm going to blame my own lack of satisfaction with all of the stuff I've accumulated.

I am learning to be content with what I have, to resist the temptation of buying new products. I have more than plenty. I remember, once upon a time, building my supplies from nothing. I used to cut images from stationary to make embellishments, I used to take the borders from coloring books to use as borders in my scrapbook pages (like in the picture above), I used to think outside of the box for my layouts. It was simple and it was fun. I was happy to see my pages come together- not because my products and supplies were the latest and greatest, but because I was creating and memory keeping.

We are a consumerist society. I used to house all of my paper crafting supplies in one of those rolling totes, then I "upgraded" to a bookshelf, then bookshelves, at one point I had a whole stinking room for my stuff. Then, I realized, "All this crap is overwhelming and distracting." I was spending half of my time organizing and reorganizing. I realized that I needed to simplify. I needed to consume less and create more. Anyway, I'm not trying to be Debbie Downer! lol. And I'm not saying I'll never buy another paper crafting related item. I'm saying I'm going to create more/be content with what I have and spend less/be less of a consumer.