books to read before they're made into movies in 2014

I came across this list of books to read before they're made into movies in 2014. What a cool list! Check out this list, too. I had mentioned that I don't like to watch a movie based on a book before I've read the book. I like to analyze the movie based on how I first perceived the characters, settings, themes, etc. Plus, I like to ruin the ending for those watching it with me. "Oh, her? Yeah, she dies." You know, that sort of thing. I'm joking, but I did just that when I was, like, 9. We went to watch My Girl in the theater, and I had already read the book. My dad was willingly listening to me analyze the movie and ruin the plot. In the climactic scene where what's-his-name gets stung by bees, I revealed that he was deathly allergic to bees and that he dies. The moviegoer behind us, finally exasperated, sighed loudly. He was nice enough not to say, "Somebody shut this kid up!" Can you imagine? How annoying! My dad finally shushed me as nicely as he could. lol.

Anyway, back to that list. I think it would be fun to read some of the ones I'm interested in before I watch the movie. I'm interested in watching the more suspenseful ones, but I probably shouldn't read the books. I'll get anxious for a longer period of time. I actually checked out Gone Girl by Gillian Flynn, but I think I'll freak out. I should probably return it for those that can handle it.

These are the ones I want to read: 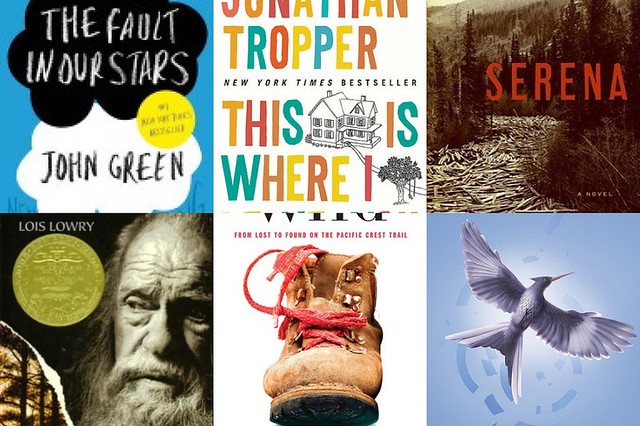 *The Fault in Our Stars by John Green (I actually just finished reading this one! More on my thoughts in another post).
*This is Where I Leave You by Jonathan Tropper (Jason Bateman will star in this movie. That's what sold me. He's hilarious).
*Serena by Ron Rash (I may get heart palpitations because it's a thriller. But. . . I'm willing to make an exception for Bradley Cooper- and Jennifer Lawrence).
*The Giver by Lois Lowry (I'm really excited about this one. I read it in middle school, but I'm rereading it before the movie is released).
*Wild by Cheryl Strayed (This is a memoir about a woman who takes a long hike alone after losing her mom and her marriage).
*Mockingjay by Suzanne Collins (Reading this one means I have to read the The Hunger Games and Catching Fire first. I watched the movies before reading the books- tsk tsk tsk).

Typically, I just order whatever I want to read from Amazon because I'm foolishly spendy like that. Recently, though, I've been requesting the books from the library. The popular ones are often out, but once it's my turn, the library will hold the book for me. It's awesome. It's thrilling to get the notice from my library that the book is ready for me to pick up. I was so giddy when The Fault in Our Stars was waiting for me.

Do you think I should read Gone Girl and risk a heart attack? Keep in mind that the most thrilling books I've read were the Goosebumps series in middle school. ;) Have you read Gone Girl??
at 11:00 AM