pasta ponza and rambling about recipes

One of my goals this year was to try 2 new recipes a month... I don't think I've done that as much as I would have liked, but I have tried a few new recipes, so that's an accomplishment. It's easier with little ones to stick with what is tried and true (but mostly, with what's liked).  I do think it's important to introduce them to new flavors, so I try to do a little of that.

I've been trying to think of new recipes that I've introduced my family to this year... I can't think of many, but I will share with you those that I do remember.

Earlier in the year, I made a buffalo chicken dip for super bowl weekend. That was very yummy.  Maybe I'll get it together, and make it for labor day weekend.

Then, my sister in law introduced me to a pasta salad recipe similar to this one (minus the pepperoni). So, so good.

Then, I made that lemon bundt cake (super good) that one time.

I also got a homemade book of recipes from Kerri that I will be using soon. I think that I thought of that because of the bundt cake. Kerri included a key lime pie recipe that I'm itching to try.

I made roasted carrot soup one time, too.

I made pizza paninis some time this year, and that was tasty and so easy (and obviously a hit with my girls).

I tried shepherd's pie another time (not good. My husband was nice and said he liked it, but when I think of shepherd's pie, I think light and creamy, not red colored and watery).

I made ratatouille one time with the lots and lots of squash that was given to us. That was okay.

I've experimented with various versions of my breakfast smoothie. Peach smoothie one time... Pineapple coconut smoothie another... Strawberry banana most often though.

Last week, I tried oven fried chicken (a recipe I found on Weight Watchers). It was tasty.

I made chicken fajitas another time, as well.

My husband and I made spinach-chicken breast rolls. We'll have to make that one again.

Some of our regular meals have been upgraded... I've been adding honey mustard to my regular turkey and cheese sandwich (that's really good).

I added squash to our spaghetti sauce another time (simple and healthy).

All of this to tell you that with one of the books my husband bought me for Christmas: 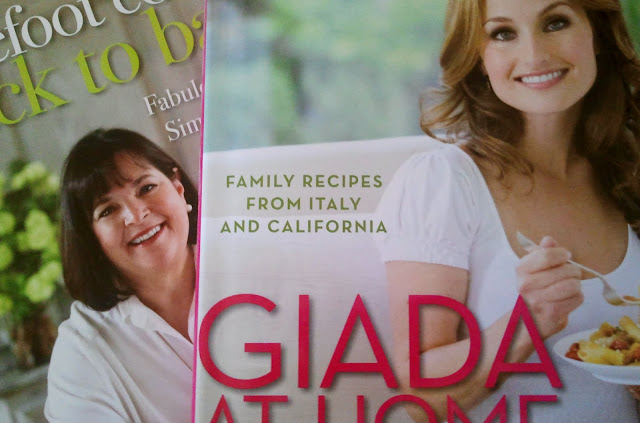 I made Giada's Pasta Ponza: 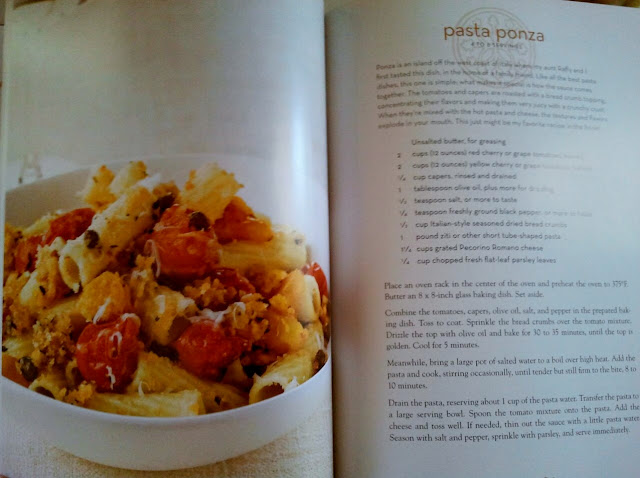 I omitted the capers as a). I didn't have any on hand, and b). I *just know* my daughter would have asked, "Mom, what's this green stuff in the otherwise delicious pasta dinner?"

I was so anxious to eat the pasta when it was done, that I forgot to take a picture. I rushed to eat it, and it was very good, by the way.

But I did remember to take a picture of the tomatoes before they roasted. 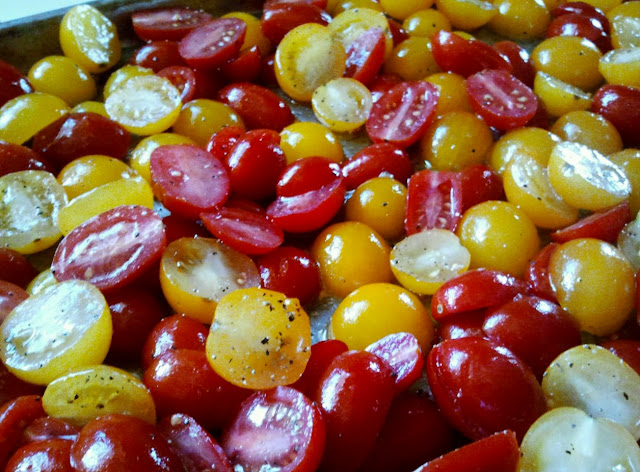 They were too pretty not to photograph.
at 12:37 PM